Let’s call a peach a peach. Last night’s blog post was kind of a mess, I didn’t get into town until about 5, I was tired and I was being entertained by our lovely host for the evening, Robyn, until pretty late. It is what it is. Robyn was fantastic! Not only did she have an awesome house used exclusively by passing cyclists but she took us out to dinner (and insisted on paying despite mine and Garreth’s protests. I’m pretty sure the waitress was in on it) but she also drove us around and gave a tour of her charming little town. So even though I got to bed way later than usual I still had a blast and loved every second of it. Thank you, Robyn!!!

This morning I woke up at 6:00 feeling a bit tired from my late night and long day but still in good spirits after having slept on a real bed. I got everything packed up onto Forrest and had a quick bite to eat at the house before setting out. I got about a mile down the road before my stomach told me, “No, James. That quick bite ain’t gonna fucking cut it”. So I pulled into a convenience store before I got out of town and grabbed a breakfast sandwich and a, you guessed it, Mountain Dew. It’s been pointed out to me (looking at you, Danielle) that I drink an insane amount of mountain dew, and it’s 100% true. I’m not much of a soda (or pop, whatever) drinker during my normal life but there’s just something about that sweet, slightly fizzy, lemony-lime flavor explosion that I can’t get enough of while cycling. It’s my cycling crack. No shame, no regrets, no excuses necessary.

Right as I leave town I’m climbing up this low-to-medium steepness hill when I see the fluorescent yellow color of my people ahead. As I slowly get closer I find that it’s not a cyclist but what appears to be a guy out for a walk with his baby in a stroller. Kind of strange this far out of town and on this particular road, but, different strokes for different folks. He’s on the left side of the road and as I pass I look back and see the words “WALK ACROSS AMERICA” emblazoned in huge letters across the front of this baby stroller. Say what?! I pull around to have a chat with this crazy guy. His name is Sebastien, he’s from Canada and he’s on the kind of epic journey that even I’d call crazy. When I asked him why he wanted to walk across America instead of his native Canada he told me he was on his way to California to shake hands with a very important person. Who you might ask? A doctor. The same doctor that had previously operated on his brain and saved his life. He’s on a journey, living life to the fullest in a way that only someone who has had a close call really an. I salute you, friend. Happy trails!

After saying goodbye to Sebastien I encountered a rather unexpected couple of rather large hills. Like, wtf? I thought I was in Kansas. They weren’t terrible I suppose but they were the last thing I was expecting to find on my route today. Another unexpected thing? TINY TURTLE! I rescued the little guy from an untimely demise under the wheel of one of the ubiquitous RV’s i’ve been seeing today. So does the size of the turtle dictate the size of the Turtle Powerup? Maybe. I was riding into a kind of headwind the first 20 miles but then made a 90 degree turn right and had only a mild sidewind to contend with. I’ll call that a win. My map told me that there was a small town immediately after my Turtle Turn that had a restaurant where I figured I could top off my bottles. Of course it was closed, but there was a water spigot and hose sitting right out front. I didn’t think that anyone would care if I stole some water so I got my fill of water from them, after checking the taste of course, I’m not trying to get poisoned again form foul hose water.

The next stop for the day is about 20 miles or so from my stealth hose water fill up station. The weather is absolutely beautiful, just enough wind to keep me cool, not a cloud in the sky and surrounded by huge, wide open spaces. And lots of cows. I mention the cows because something extremely important happened today. Concerning cows. I know, bear with me. I pass a group of these big, dumb bovines lounging out in the shade of a tree. Nothing unusual, they’re probably hot. Upon closer inspection I notice that all of the cows under the tree are black haired cows and right there next to tree, in the full light of the sun, are two brown cows. FINALLY! After 15 years of this question tickling the back of my mind I finally have empirical evidence that black cows do get hotter than brown cows. And why the shit is this question even in that weird little head of mine? You can blame my middle school English teacher, Lore Martin. She told a story in class and that particular question was the crux of the whole thing. So there you go, Lore. Black cows get hotter than brown cows and I can finally sleep soundly after 15 years.

Following this startling discovery that I made I still had about 40 miles to my destination. And not just any 40 miles, but a 40 mile stretch of absolute nothingness. I’m not exaggerating or using hyperbole or anything, my maps literally said “No services next 40.5 miles”. Which basically means, “Top off your water bottles and crank up the music, kids. There ain’t shit ahead of here.” And holy shit was it boring. Near the end I was starting to go crazy, like it felt like I was one of those side-running NES games from the 90’s but stuck on the same scene over and over. I sang out loud at the top of my voice, called some friends, counted lines on the ground. Literally anything. But it was mostly flat and the weather was nice so I should count my turtle blessings. I arrived in Newton at about 2:00 and headed for the park, the city allows cyclists to camp in the park on their way along the trail. For free. I love Kansas. Kind of. A little. Meh, not really. But you can’t beat free.

The final little fiasco for the day happened when I rolled up to the park. I went to pull my right foot out of the clip and stop, but of course my damn shoe was stuck. So I fell over. The park was not empty, there were many witnesses to my shame. Such is the life of James, a constant barrage of fun and embarrassing events strung together, end to end, until I die. But anyways, that is all for now folks, beer and food time. Stay tuned for the next edition of James and his Bike! 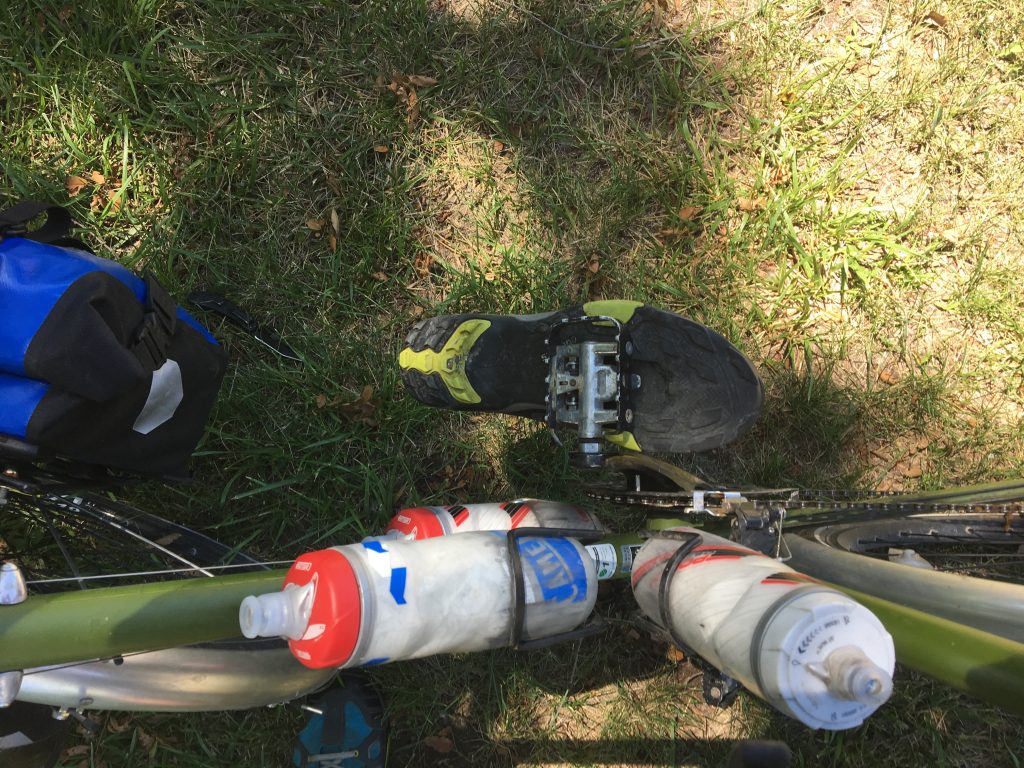 -James is addicted to Mountain Dew. Take him to a meeting

-“Lots of Corn” find it on Super Nintendo in stores near you!