Nothing really noteworthy happened last night after my update except a beautiful sunset over the river. Follow me on Instagram if you’re into that sort of thing or if you’d like to see me trying to be a classy photographer 🙂  @jamesandhisbike

So I woke up this morning around 630, made a quick breakfast of oatmeal and honey, packed up my camp and set off for another day in the saddle. I think my butt is finally getting used to being on the bike all day or maybe my leather seat is finally starting to break in because my hind region was totally devoid of pain 🙂 The weather was perfect and I my route took me over a lovely bridge with a pretty sweet view. Excellent way to start the day.

My first stop was in Pollocksville, NC about 20 miles from my camp. I needed to ship a box of stuff that I don’t need back home. Turns out I do not need cold weather clothes, like at all. The postmaster was really curious about my trip and I ended up talking to him for about half an hour. Really great guy and he hooked my up with a bunch of ice cold bottled water to top off my bottles! Score! He also told me that the diner next door made the best omelets this side of the Mississippi. I’m not one to turn down a delicious omelet so I went there for a big ol’ second breakfast. Yum yum yum! My appetite thus far has been bordering on obscene. The poor waitress came back to bring me some hot sauce but I had already scarfed down everything. The look on her face was priceless.

Bolstered by my second meal for the day I pedaled on. There wasn’t any wind to speak of this morning which meant there were trillions of tiny little gnats everywhere. I was wiping them out of my face and off my clothes when a thought occurred to me. You know how trains have that contraption in the front that supposedly pushed cattle and debris out of the way? Well I have one of those too. It’s my beard… When I stopped to fill up my water bottles I looked in the mirror and it was like a bug graveyard on my face! I rather like this new beard look I have going on so I’m just going to have to suffer not to mention if I shaved it now I’d have one gnarly looking tan line.

I came out of the bathroom with my beard relatively bug gut free and was about to hop on my bike and go when a lady approached me and asked if I’d like some fresh chocolate chip cookies. Ummmm, yes please! She was on her way to a church bake sale but said that I looked like I could use something sweet to keep me going. I’m still truly amazed at how incredibly kind people have been towards me on this trip. It seems like the news makes it seem like everything is going to shit and there’s danger everywhere. While I don’t doubt that there are awful people out there I still think that pretty much everyone you meet is just trying their best to be a decent person.

With my belly full of cookies and my heart filled with joy (I can be as cheesy as I want, it’s my blog) I finished up the last 15 or so miles of today’s ride. The campground has showers which is always a plus because I smell bad. Once I got out the shower, though, I felt really itchy all over my arms. When I looked in the mirror I almost died. My arms are COVERED in mosquito bites. Like to a disgusting degree. I’d noticed some red spots on them the morning after the blair-witch-snake camp but they didn’t itch so I just ignored it. I guess the bites had to marinate a but before they came out in full force. I’m pretty sure the mosquitos were biting me through the fabric of my hammock all night. Grrrrr. 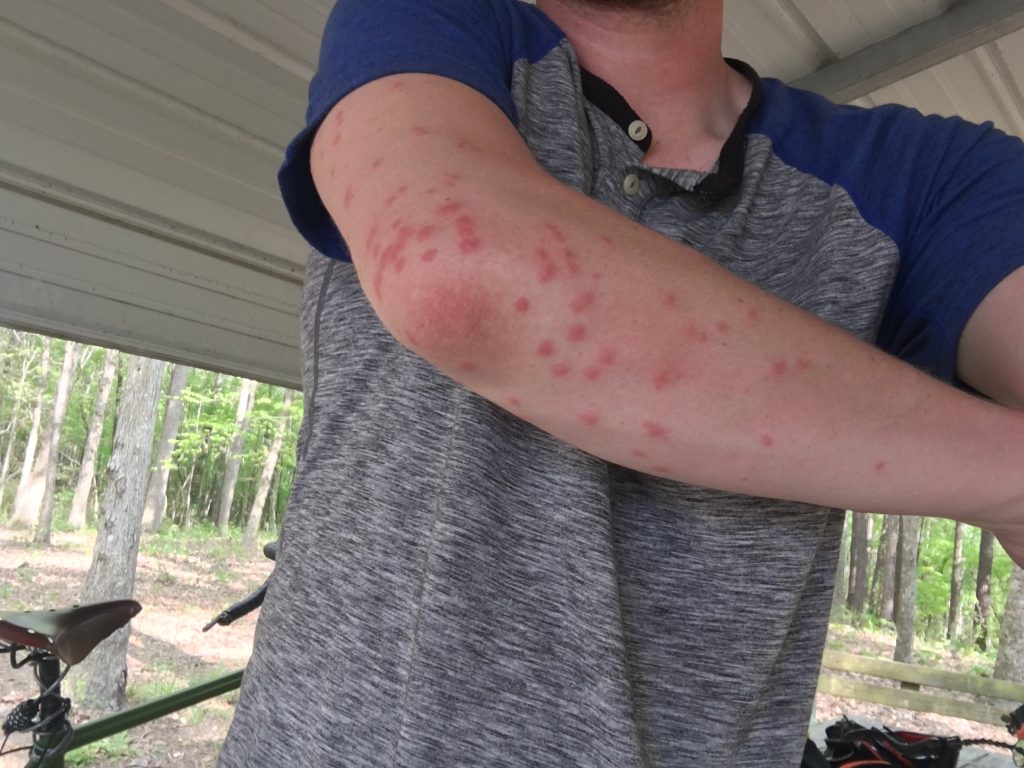 Well that’s it for today. It’s time to have some dinner and a well deserved beer. Hopefully I’ll have some funny dog stories for ya’ll tomorrow. 🙂

Holy crap how could I forget the most hilarious part of my day! So there I was, pedaling along as usual when I come to an intersection with a red light. No big deal, I’m an excellent stopper hehe. Before I go any further you need a little amplifying information. My shoes have these nifty little clips in them that secure my feet to the peddles. It’s supposed to make my pedal strokes more efficient by allowing my to pull up as well as push down, I don’t really do it that often but when I need a little extra boost it comes in handy. Well in order to get my feet unhooked I have to twist them sideways to unlatch the clicky mechanism (technical bicycling term :p ) Well when I came to this stop I tried to unclick my left foot. It didn’t quite work out as I wanted…. Instead of gracefully coming to a halt and lowering my unhooked foot I came to a stop and fell over. It was as hilarious as it sounds. Well once I got my foot unstuck, picked up my bike and my dignity I continued on to where I came to ANOTHER stop. Hilarity ensued. I did the exact same thing a second time except this time I had an audience of about 9 cars all waiting for the green light. So I layed there, covered in dirt and shame, and thought back to all the mean things I’d done in my life to deserve this. I tried to unclick my foot from the peddle but it was stuck good and I was forced to remove my foot from my shoe. I tightened up the clicky thing on the bottom of my shoe and it worked great after that but I made sure to unhook well in advance of any future stops lest I embarrass myself again.