After taking and extra day off in Missoula I woke up feeling refreshed and ready to tackle another day. We stopped in at a coffee shop to have some breakfast and got on the road at about 10:00. We rode about 11 miles out of town before stopping in at a convenience store to get some energy drinks to fuel us to the top of the mountain we would soon be climbing. I almost feel bad for getting poor ol’ Sebastian in the habit of crushing a can of Monster before a hard climb because I’m sure it can’t be good for you. Then again he’s become an enabler of my quest for cold beer at the end of a long ride. It all evens out in the end, right? Right.

The next 19 miles took us along a long, beautiful and winding road heading up towards Lolo Pass. Normally a gentle but steady climb like this would really start to suck the life out of you after the first few miles but we were quite lucky in that we had a nice tailwind to hep us along, well that and an obscene amount of caffeine straight to the veins. But no, it’s the fact that we’re turbo charged endurance athletes that enabled us to maintain a steady 17MPH all the way to Lolo Hot Springs, a small not-quite-town right before the real climbing began. Without even communicating the idea ahead of time we both silently agreed to stop in at the bar and enjoy an ice cold pint before tackling the mountain. If there’s one thing that Seb and I always agree on it’s that beer is a small but extremely necessary ingredient in any day of ling riding, usually at the end but in the middle is perfectly acceptable Beer=carbs=energy=happiness 🙂

With our heart’s and belly’s happily filled with cheap Coors Light we set off in search of a mountain to tame. The elevation profile on the maps had me kind of worried, they made it seem like this was gonna be one bitch of a climb. It was, but not as bad as I had envisioned. About halfway up I see a semi slowly gaining on us in my rearview mirror. He was chug-a-lugging just a little bit faster than we were going. Hmmmm. As he slowly makes his way past us I reach out and grab onto the rear and, just like that, I’m effortlessly gliding up the hill. I yell out for Sebastian to grab ahold but he couldn’t find a safe spot to do so. Such is life. I disengage from the easy train and continue to cry myself up the hill under my own power. It wasn’t so bad and before I knew it we crested the top and entered both Idaho and the Pacific Timezone. NEW STATE! NEW TIMEZONE! IT’S ALMOST TOO MUCH FUCKING AWESOME HAPPENING AT ONCE!!! 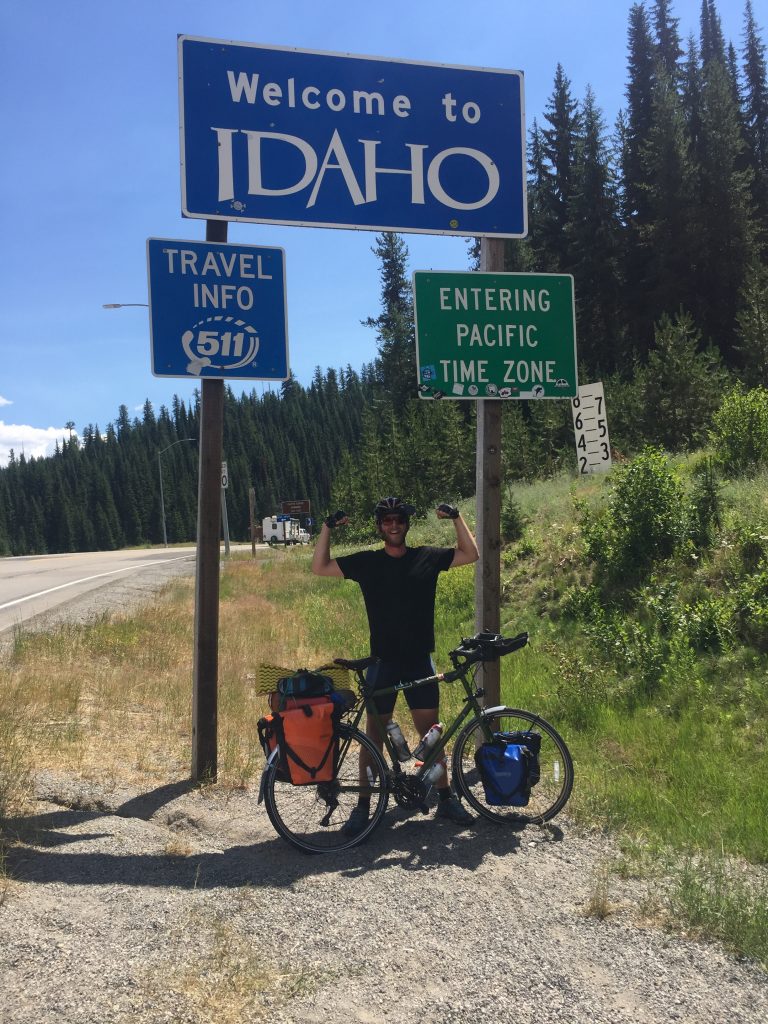 The whole time climbing up the pass we had a gentle tailwind and I figured it would continue on the way down. Nope. Not even close. It was such an awesome downhill too, super steep, lots of curves, beautiful scenery but also a relentless fucking headwind. Also the roads SUCKED! Half the time was spent dodging potholes and the other half was spent cursing the stupid headwind. Again, such is life. I’ll take a headwind going downhill over one going uphill any day of the week. Once we got to the bottom of the pass we were still heading downhill but at a much gentler grade which made the next 15 or 20 miles pass pretty quickly. We were treated with free camping and 5 dollar showers at Lochsa Lodge for the night. Normally I would balk at the idea of paying 5 bucks for a shower but I made peace with the idea by thinking of it in a different light. 5 dollars to camp and free shower. A clean James is a happy James. Stay tuned for the next edition of James and his Bike!

-Extra day off in Missoula because hangover, errr, because it’s such a lovely city!

-I’ve awoken the Monster in Sebastian

-Downhill into a fucking headwind