I woke up today at 6:30 absolutely dreading the day ahead. Well, maybe not dreading, but definitely a bit apprehensive. We’d planned a ridiculously long day today so that we could take a day off in Missoula while we wait Terry, Gene and Michael to get here, also there are at least 10 breweries here and I intend to make a dent in that number. Anyways, so I got my stuff packed up onto Forrest and was ready to hit the road but that sleepy Brit bastard Sebastian was still snoring away in his tent. Now I’m normally not one to impinge on somebody else beauty rest but I felt like today was as a good a time as any to start, so I passive aggressively threw rocks at his tent until he finally grumbled out of bed and got his shit together. Once we got on the road our first stop was at the 4 mile mark for some breakfast at McDonalds (Or as the Brits call it, Mackers). Yes, even on a 100+ mile day we still make time to get a nice, healthy, well balanced breakfast to motor us along.

After breakfast we got on the road for real this time at about 9:00 and were both making wild estimates as to what time we thought we’d finally make it to Missoula and repeating the helpful lie that it would be all downhill and sooo easy. And you know what? It kind of was. We breezed through the first 40 miles like it was nothing and it really was mostly downhill, not the kind of screaming downhill you’d get coming off of a mountain but we were definitely descending. We stopped in at a gas station to refuel and I found myself craving something I hadn’t been craving in a while: a big, fat pickle! Nomnomnomnom. Also a Mountain Dew because I’ve gotta keep the dragon fed lest I collapse on the side of the road. It was a really great feeling to just be able to crush 40 miles straight and still feel so full of energy, it seems like not that long ago that I’d have been dead tired after a stunt like that. Hooray for the adaptability of the human body and my general levels of badassery!

We decided after the break that we’d keep on pushing another 40 miles before taking another, it seemed to be a good number considering we had extremely favorable conditions. I didn’t mention it before but the entire route today was riding on Interstate 90, and even though we usually avoid the interstates like the plague it was the most direct route between Butte an Missoula that would allow us to do it in one, albeit long, day. We were pretty lucky since, even though it wasn’t the most scenic way of getting from one point to the other, we had a giant shoulder and the traffic rumbling by at 80 MPH (the speed limit in Montana) did a pretty good job of creating an artificial tailwind most of the time. At around the next 40 mile mark pulled over to check where the next service station would be only to realize that there wasn’t any towns for another 30 miles. Oops. We were both running a bit low on water but as there was nothing we could do about it we pressed on. Fate was on our side today, though, about 4 miles up the road we came to a rest stop where we were able to top off and take a real break. 80 mile so far today and, despite starting to feel the miles a bit more, we were both feeling like totally badass, super high powered endurance athletes. We’d been averaging 19MPH for the last 80 miles and it looked like we would be completing this ride in record time! What could possibly go wrong? 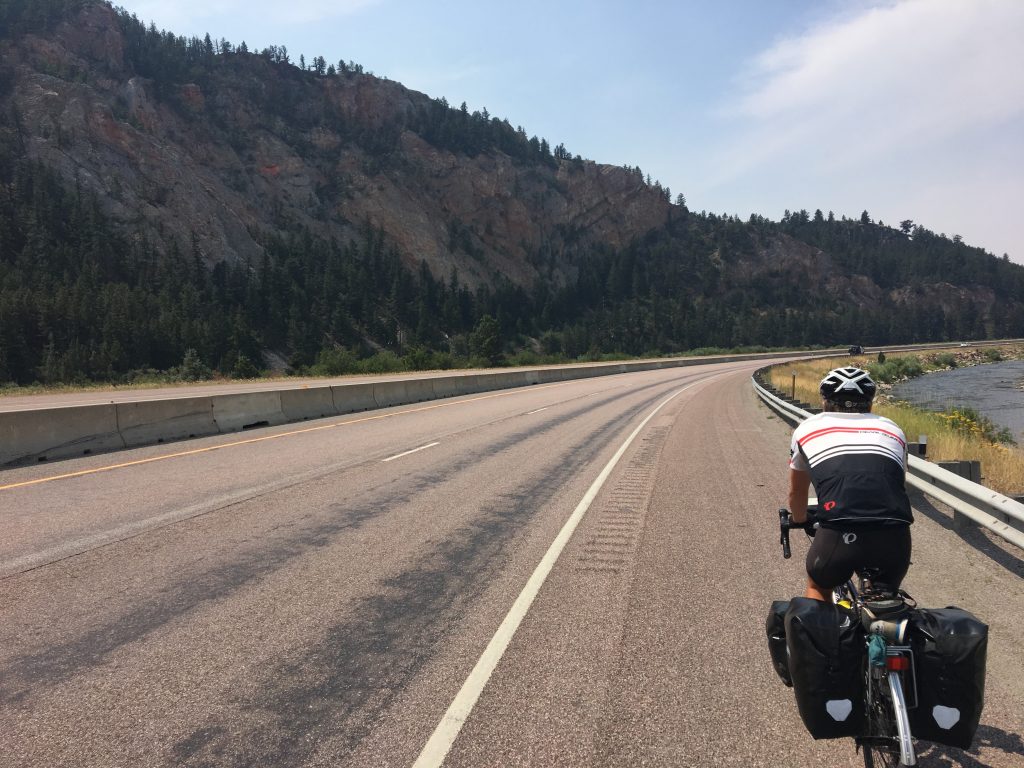 The wind. The wind could go wrong. Like a mighty bitch slap from Mother Nature herself we were cut down in our prime by forces beyond our control as soon as we left the rest area and rounded a corner headed west. The good thing about traveling with the group the last few weeks is that I’ve become an expert at drafting, that awesome cycling trick where you take turns being in the lead in order to conserve energy. It was going pretty well, not as easy as the last 80 miles, but not exactly soul crushing either and it helped that the route was still trending downwards. Seriously, it seemed like our lies we were telling ourselves earlier were, in fact, truths. It wasn’t enough to coast the whole way exactly but it allowed us to maintain a decent speed even with the nasty headwind. Up until Sebastian got a flat. The shoulder was littered with the remains of exploded semi truck tires which were in turn loaded with these tiny little wires that are a death sentence for our measly little tires. He made quick work of it, though, and we were back on the road in 15 minutes. We came to a tiny little bar about 15 miles from our destination and stopped in to get something cold to drink. No, not beers, those are only for good little cyclists that complete their long day of riding. We both pounded a Red Bull and a soda each before heading back out into the wind.

The last 15 miles was easily the longest and most difficult I’ve ever done. My body was spent, my water was piss warm and I just really needed some food in my belly. We did it though. 127 fucking miles! We got to Missoula and headed to Sebastian’s new favorite restaurant, Buffalo Wild Wings, for the some celebratory beers and food. When we were finished and came back outside to head to the motel I made some snide, smartass comment to him about getting a flat only to have it shoved back in my face when I realized my rear tire had deflated while we were celebrating. Grrrrr. A fitting blast of karmic retribution. I guess I’ll learn some day to keep my stupid mouth shut. Stay tuned for the next edition of James and his Bike! (After our rest day of course)

-Racing downhill and the surprise return of the pickle!

-Saved by a highway rest stop

-Sebastian gets a flat tire for being such a smug asshole

-James gets a flat tire for being such a smug asshole