Our friends Josh and Heather were completing the final day of their bicycle tour today so we all thought it was appropriate to go out and celebrate the occasion. All 7 of us headed out to an old-timey diner for some burgers and malts and afterwards Josh, Heather, Sebastian and I decided to go to a bar to have a few drinks. We had kind of a long day planned for tomorrow so Seb and I decided to give ourselves a 10PM curfew in order to get enough beauty sleep. HA! We should have learned our lessons the last few times we went to the bar with Josh, he’s an animal and he has a way of turning those around him into animals as well. It was a great night out and when we finally got back to the hostel at around 2 I fell into a deep, bear-like slumber.

I had set my alarm for 7AM but when it went off I knew there was absofuckinglutely no possible way I was prepared to wake up and start cycling. Sebastian must have had the same idea because he was snoring away, so, like the lazy piece of shit that I am, I happily went back to sleep for another few hours. By the time 930 rolled around I figured it was either get up and cycle or call it quits right then and there and go work in the brothel. I’m not quite pretty enough for brothel work so my only option was to get up and pedal my merry ass down the road. By the time we got our bikes packed up, got some McD’s breakfast and hit the road it was 11am, easily the latest start I’ve gotten on the whole trip. Not a bad thing by any means, it was actually really nice to not freeze my ass off the first hour of the day, but I don’t think I’ll be making a habit of it.

The first leg of the day couldn’t have gone any better. It started off with a really long, gradual downhill accompanied by a nice tailwind. We spotted another cyclist waaayy off in the distance heading the same direction and we both decided that it had to be our long lost Dutch friend, Robert. The last thing we’d heard about him was from another cyclist who said he was backtracking to locate a small bag that had fallen off his bike. So even though we were both feeling the effects of a long night of drinking we felt it was our duty to push ourselves to the limit to try and catch up to him. It took us the better part of an hour of riding along at this unsustainable pace before we got close enough to see that it wasn’t Robert at all, just a regular guy on a super swift road bike. Despite us realizing that it wasn’t our friend we were already too committed to catching this guy to just give up, you don’t just throw away an hour of sweat of determination for nothing. I didn’t get his name but he told us he was a team leader on the original TransAmerica tour when the route was established in 1976! Those guys were complete badasses, like I couldn’t imagine doing this insanely long journey with nothing to go on but an atlas and a metric fuck ton of courage. We chatted for a bit while riding along and then he set off at a pace we couldn’t hope of matching. Fucking showoff :-p 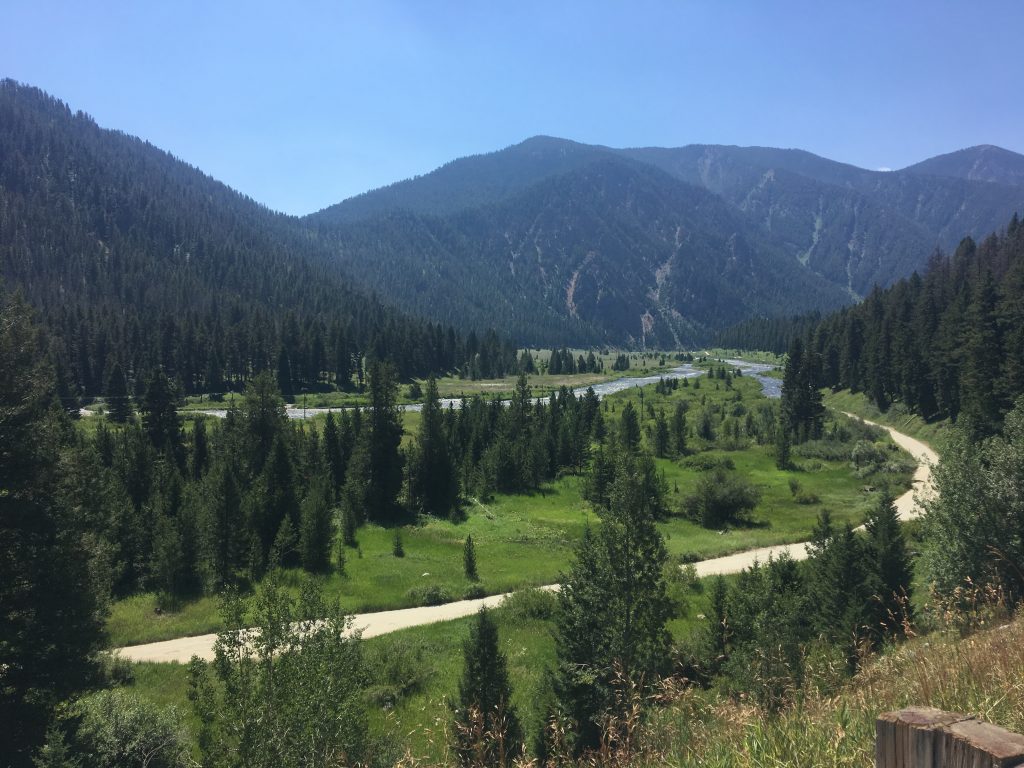 We were extremely fortunate today that the route trended downhill most of the way, there were a few small climbs to contend with but nothing too taxing. At about the 50 mile mark we spotted a group of cyclists in the distance, they didn’t have any panniers on their bikes and they were all wearing matching jerseys so we figured them for a local bicycling group. When we caught up to them we were pleasantly surprised to find out that they were cross country riders as well. They’re doing their trip supported, which means they have a van that follows them along carrying their food and bags and such, and are cycling from Baltimore to Portland for charity. Being in no particular hurry we decided to ride along with them the rest of the day as they were heading to the same destination. They invited us to have lunch with their group about 20 miles outside of Ennis to which we happily agreed, if I’ve learned anything it’s to never turn down a free lunch. So on top of the 5 people we rode with there were another 18 waiting at the rest stop having lunch and they were all so friendly and welcoming. After hanging out and having lunch we made plans to meet up in town for a drink later and Sebastian and I set off for the final miles.

It should have been an easy 20 miles but man was it hell. The wind was fucking howling right in our faces and it took every ounce of reserve energy to keep a decent pace going. By the time we got into town I was spent but I felt pretty good, challenging days always suck but once you finally finish it’s such a huge feeling of accomplishment. Ain’t nothing gonna get in my way! Stay tuned for the next edition of James and his Bike!

-Josh is a fucking animal

-James chases a Dutch man that isn’t really there