I woke up this morning feeling particularly refreshed and ready to tackle some mountains! We grabbed some free breakfast from the hotel and set out into the morning and holy shit was it cold! The first 5 miles or so into the city of Alma were almost all completely downhill which I would normally be thrilled about, not today though. It was cold and I wasn’t even close to being warmed up, so all that frigid air blowing past me froze me to the core, plus every foot we descended would have to be made up later when we climbed the pass. Grrrr. The scenery was absolutely stunning though! I’ve been all over this country, all over the world and I’ve never seen anything quite as beautiful as the morning sun slowly making it’s way down the tips of these snowcapped mountains. I took a bunch of photos but they really don’t do the scene justice, I guess some things can only be truly appreciated in person. 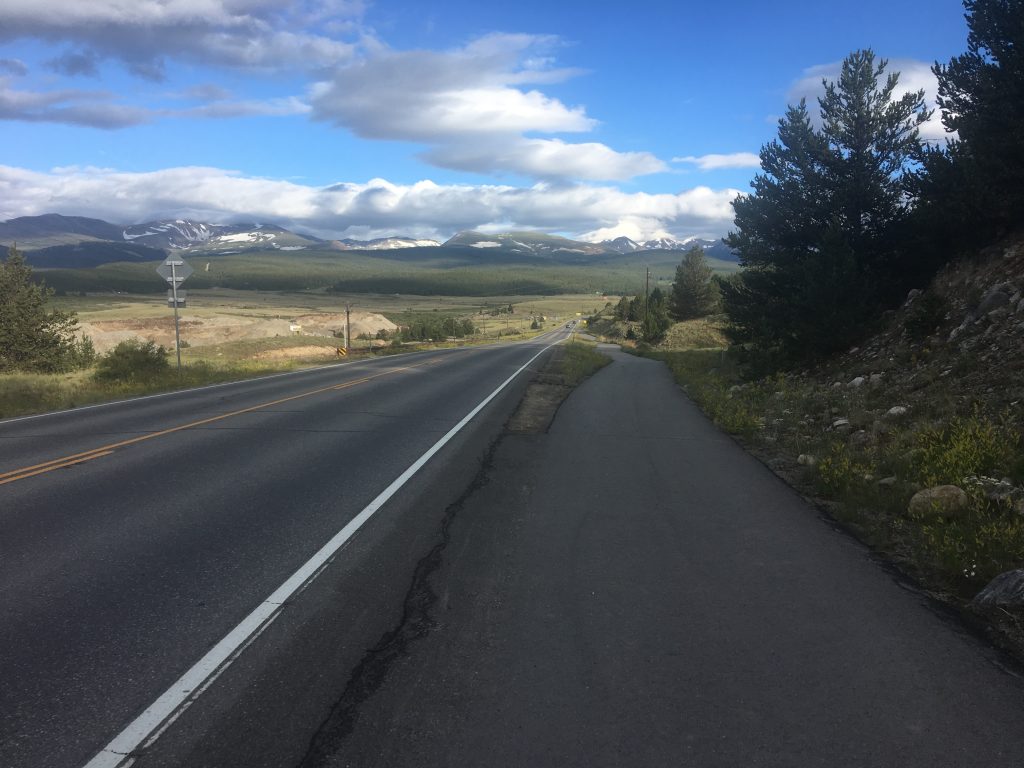 After Alma began the slow, steep 4 miles climb up Hoosier Pass. The first mile was extremely difficult. Approaching the first rise it seemed like the road just rose up and up and up with no end in sight, I’m not sure what the grade was but it was really kicking my ass. There was absolutely no shoulder to speak of whatsoever and there was a lot of traffic as well, most of the cars were pretty respectful and either gave us a wide berth or waited until there was no oncoming traffic to pass. But not all of them. Sebastian and I were huffing our way up the mountain, sweating our bloody asses off when I spot this big, red dually come roaring up behind us. There were no cars coming the opposite direction so I figured he’d do the sensible thing and, you know, not try and kill us. Nope. This ass clown roars passed us so close that if I had leaned 6 inches to the left his mirrors would have ripped my head off. When we met up with the rest of the group a bit later we were surprised to hear that they had all had similar experiences with this red truck and he’d even forced Terry to gravel his bike to avoid being smashed. I had my GoPro on so hopefully I can get a license plate number to report him to the police. Moving on.

So we get a little over halfway to the top and pull into a turn around spot to take a break and for Sebastien to take the most scenic piss off the side of the mountain. The elevation was really messing with me, it seemed like no matter how much air I sucked down I couldn’t get enough O2. Enter James’ Brilliant Idea Number 8642. The hotel we stayed at last night was selling these cans of grapefruit flavored oxygen that kind of looked like a Febreeze bottle with a little face mask on the top. Of course I bought one. When we stopped, and the whole way up the mountain, I was sucking down pure, unadulterated oxygen like my life depended on it. I’m not sure if it helped and it seemed kinda gimmicky when I bought it but, eh, what the hell, makes for a funny photo. We slogged on for the last few miles and finally, finally, FINALLY reached the top. I was sweating, freezing my ass off and my legs felt like jelly but holy shit did I feel amazing! I can’t even begin to describe the feeling of accomplishment I felt after having pedaled 300 pounds of James, his Bike and gear to the top of a fucking mountain, there’s no substance in existence that can compete with that incredible high. A side note that I thought was funny: Sebastian told me I climb mountains like I’m angry at them. It made me chuckle and is completely, 100% true. I am fucking angry at them, the audacity they have to get in my way and impede my progress 🙂


After we all snapped a few pictures in front of the sign at the summit it was time to reap our reward for conquering the mountain. DOWN FUCKING HILL BITCHES!!!! Holy shit. That’s all I can say. Well, not really, but you get the idea. The road down the other side was so much steeper than coming up and it was filled with winding, twisting curves that you were supposed to take at 15MPH in a car. We were screaming down them! Terry later told me that when he looked down at me while I was ripping around one of these corners that it looked like I was almost perpendicular to the ground, leg out for balance and tearing up some asphalt. He said it was a sight he would never forget. I had my GoPro on the whole time but I guess I triggered the time-lapse setting instead of the video setting so I we’ll see how it looks. But man, it was a riot. And it just never ended. The downhills continued through the town of Breckenridge, where we popped into the bike shop as I needed new cycling gloves, all the way to our campsite for the night. Days like this are what keep me motivated. So much work but so much reward as well. Lets hope the days ahead are just as sweet. Stay tuned for the next edition of James and his Bike!

-The cold fucking sucks in general

-James is basically a Formula One racer on the downhills

-Did I mention being cold fucking sucks?